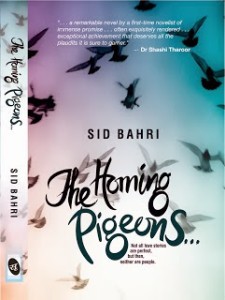 The Homing Pigeons by Sid Bahri is a great debut from a blogger turned author. The tale of two individuals who go through various paths ultimately come to roost to their nest. He takes the tale from the pigeons who fly the valleys and plains yet long for that coming home to the love that they have seen and can be always be sure of.

There’s a take on the middle class morals and ethics which the author casts aside in the way of making the life of individual the fulcrum of his story. The characters look surreal sometimes and also delve deep into the psyche which is formed in the childhood years. At one point I think this is the story of woman protagonist Radhika, because it is in her story that the author takes liberties in transforming the character with the aid of the situations that she is in.

The narrative is good and has a little bump towards the end, where Aditya’s take is a bit behind that of Radhika. The first person account is a nice revelation especially when some personal choices have to made by the characters.

This story is also that of the rising Indian consumer centric individual who is now pushed into material pursuit and makes a statement of choice, especially when you have the protagonist taking the road which would be impossible some decades ago.

As the narrative progresses there is a certainty to the story in the end, possibly that could have been avoided. Quite often the case of the characters is that of the real life where in the decisions could have been taken a little later. It’s a reflection of the life that we live.

A very fast paced read and very close to reality, and goes forth back in time without actually taking you off.

On the typos, for someone from Kerala the name of my state was wrong in the book.

“This book review is a part of The Readers Cosmos Book Review Program. To get free books log on to thereaderscosmos.blogspot.com“