Tidbit 1: The washer man has been an integral part of India’s history if you know. He was one of the reasons who sent Sita to the forest after their return to the invincible Kingdom of Ayodhya.

Tidbit 2: In the early days of the introduction of Washing Machines in India, market survey report had said Indian women would not take a liking to washing machines but the company thought otherwise and rest as they is history.

It was nice to get a pack of Ariel for this #WashBucketChallenge. That was a reminder of the pledge to #sharetheload.

Dad has been a helping hand to mom. Going back in time, since their marriage perhaps it was he who helped even learn the ropes at the kitchen. and it continues even today if mom makes a trip to native, dad manages the kitchen with little to no help sometimes from me.

But this has had its effect making us very self reliant in the way when we are alone and when we need to help.

I think this is more or so the common thread in many families. may be they would not talk about it. And this exactly is the reason why I like this topic, and this activity has brought to light so many of the adorable men in our midst who are doing things without making the noise.

So when this activity came up I was delighted to be a part of it and sharetheworkload. And after long I did this and intend to continue whenever opportunity arises especially after an outstation trip or weekends.

Now to the interesting part of Ariel and the effort to #sharetheload. So on the Dday which was a Saturday, I took up all the clothes which were supposed to be washed. Added water to the machine and watched it fill to the level needed and then added a spoonful of the Ariel washing powder. 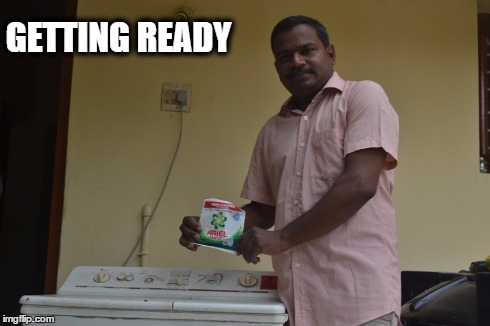 I had a shirts which was going to be a challenge to Ariel, and that one had a bit of tea spill on it. I put them together in the washing machine. I watched as the machine spun and set the process of washing…

After 20 minutes I pulled the clothes out to check how it was and found that they were looking clean and soft. I then put them in soft water which actually is the Siruvani water here for better effect and made them look like new.

The best part was the clean shirt which had the tea spill now had no trace of it. I enjoyed a break infact getting back to washing clothes should be a normal chore instead of it being on and off. The Ariel detergent has a nice effect on the fabric and that shows very clearly when you wear it.

Also you could calculate the amount of calories spent doing this. You will be surprised on this. Check for yourself.

This review is a part of the biggest Sponsored Review Program for Indian Bloggers. Participate now to get free Products!

Now to the tidbit that I had posted before, men always had been washing probably. Now they are getting back to doing that!