A career crisis is a phase everyone goes through at some point in time of their life. The earlier one gets it, it makes you better to anticipate somethings for yourself. In this book the author Utkarsh Rai takes us through some of the most mind boggling times when we should have had the real experience of being faster, smarter and think higher.

The author has made the book into 8 parts and each one is a testament on how you can manage different sets of values and sometimes people.

The book provides ample insights in giving us the solutions in the form of What can you do? Quite often it’s this question that needs to be answered and that’s how it is done.

I think this is an encapsulation in a very fine format which young budding managers need to learn a bit especially about managing their managers and their peers, this I think is a very new way to look at the career prospects and the people influencing the same.

The quotes which accompany the chapters are very thought provoking and mostly application driven and has the ability to propel you to achieve what you want in your career. In hindsight when I look back I feel things could have been different if I had read something like this before early in my career and it could have really made a difference.

I think this book is a go to guide for you whenever you need to go back and check and how you need to work on the situations that you come across. It’s more about people and how we manage them to get the best out of them.

It’s a fast read in a sense but will hold your thoughts for a while and sometimes you might take time to digest and flip through to the next page.

Another aspect is the simple straight talking language that is akin to speaking straight to you, making you comfortable and talking to you in a way that makes it easy to understand and help ourselves.

Pick this book and this will be an immense help for yourself and will turn to be a go to guide for times to come.

This review is a part of Flipkart Sponsored Book review program. To pick up your copy of this book just click here

Its almost 10 years now since Narain Karthikeyan scorched the tracks at Australian GP in 2005. The season opener had good news for the Indian since Schumi acknowledged him during the Press Conference on Thursday.

I know Narain would have been on cloud nine, why not that was his idol Schumi talking about him. He has always said this about Schumi – He is like red wine and the more the years, the more better he gets. We do hope Schumi gets back to normalcy at this juncture and yes we do know his son Mika is getting into his boots.

That pic is a memorable one for the reason that an Indian was taking part in the parade for the first time. Back home it did create a lot of expectation for him to win the races. Well it was a well intentioned thought, though from people who didn’t know Narain did all he could with the machine at his disposal.

The qualifying was a classic affair giving Narain the rain master as he is nick named a chance to prove his mettle. He went on to start the grid on 12! A great way to start off the season.

There was a big headline I remember which said, Narain will carry on the big hopes of a billion people, it was true and it indeed was a moment to cherish. 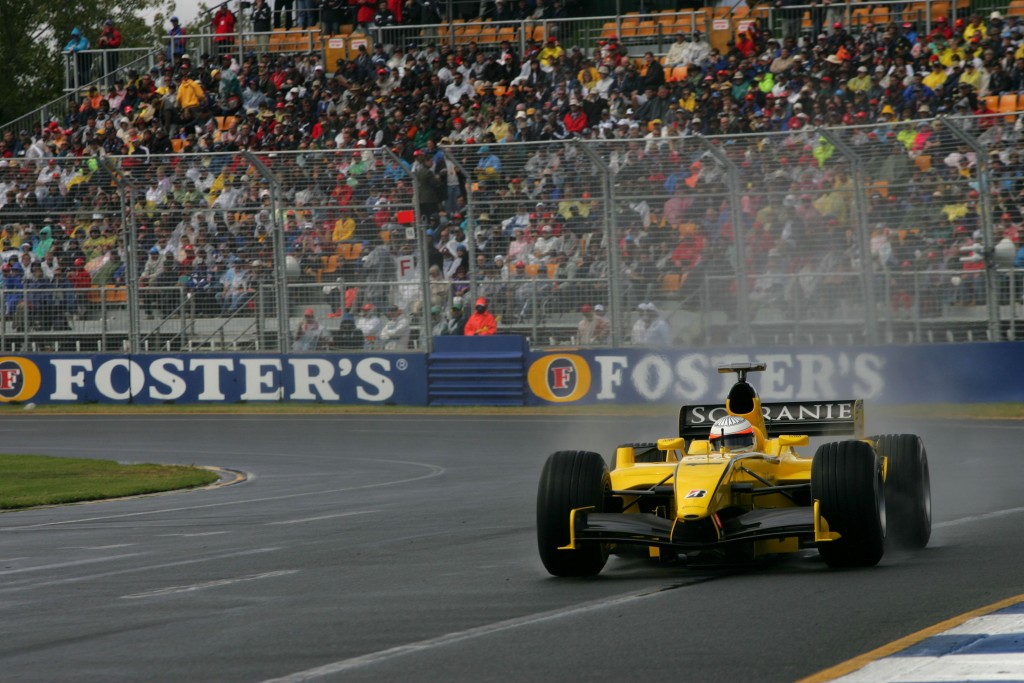 Narain finished a creditable 15th on the grid on the race day 10 years ago at Australia.

That was a start of a roller coaster ride for an Indian in F1. Will get you more on this series.

Before I sign off this one, I should mention the critical part played by the sponsors and especially Mr. Ratan Tata who endorsed Narain’s talent to be a part of this big league. Thanks to TATA Motors, Bharat Petroleum Speed, JK Tyres, and Amaron Batteries.

This is the 2nd part of the series #MyF1years getting you some inside moments during the year.

It is quite an achievement from all the people who have time and make it a very important point to write them whenever they think fit and that whenever is actually everytime!

So the next time you feel you want to write take a paper or start keying in whatever you have in your mind as I am doing right now!

Ok today I am just starting and let me tell you there is no right time to do anything right and yes the right time is now!

So lets make it happen dont make the right things wait on you!

That was a very pleasantly surprising news, when HRT announced the lineup with Pedro De La Rosa and Narain Karthikeyan for the year 2012. I am not going into the specifics of sponsorships especially when even the last year HRT ran with TATA as the main sponsor. A season aborted last year and making a historic appearance during the Indian GP, I remember his exact lines.

Driving in front of the home crowd cheering [me] on is going to be a surreal experience, a once in a lifetime experience and I feel extremely fortunate.

That he could make it irrespective of the competition so hard speaks volume about the confidence in the way he can pull it off. I am not talking about the monetary part, I have had the opportunity to see him at close quarters and let me admit that he has this confidence of pulling it off when people almost have written him off.

I remember even the first season, it was a great debut going by what he has been through, and sponsorship issues which stopped him from racing with the erstwhile Minardi for a couple of races in 2004. It was always his optimistic outlook which saw him in good stead even when the critics wrote him off and that included some of the reporters who were reporting F1 for the first time.

His presence augurs well for F1 in India and most importantly the Indian GP. This will also boost the fortunes of the young drivers especially the likes of Armaan Ebrahim and Aditya Patel and others. Karun ofcourse will be a reserve driver.

For me, Formula 1 is a continued dream, it is always ultra-competitive and competing at the pinnacle of the sport is what I love. So I am very happy to have the opportunity to continue living my dream and I have every intention to make the best out of it.

As for the sponsors they will be able to leverage the last year one off sponsorships to a more sustainable year long affair. I am happy to see an Indian on the track who is a cynosure of all eyes in the paddock. In one of my conversations with a F1 driver, he saw Narain as a natural & gifted driver and lets not forget what his team mate at Carlin Motorsports the present day Mc Laren driver Jenson Button had to say. He was in praise of him infact he had beaten Jenson in British F3.

Talking about Carlin Motorsports, I am reminded how close Trevor Carlin was to owning an F1 team and that would have changed Narain’s career in F1 and also the Indian connection would have had far reaching effects. Having said that, lets resign to the fact like what Narain said all’s well that ends well.

With India solidly a part of the F1 calendar we can only hope for the best to happen and wish it had happened a little earlier it would have been far better and more robust Narain with better experience and far better team to contend with.

Lets hope for some real stellar drive from the fastest Indian! This season gives another opportunity for the Indian F1 fan to root for another car apart from the Sahara Force India F1 team.

Now the most important thing which made me blog this post was this part of the Q & A:

Q: How would you define yourself as a driver?

NK: One thing’s for sure – I never give up. I’m here, against all odds and expectations, which wouldn’t have been possible otherwise. I have worked incredibly hard, I believe in my ability and know that I am as quick as anyone else out there.

Here’s wishing him all the best and salutation to his never say die attitude which  has got him back to where he rightfully belongs.

Here it goes, some quotes for you… on procrastination becoz I was doing just that….

Nothing is so fatiguing as the eternal hanging on of an uncompleted task. ~William James

Procrastination is the art of keeping up with yesterday. ~Don Marquis

Only Robinson Crusoe had everything done by Friday. ~Author Unknown

Every duty which is bidden to wait returns with seven fresh duties at its back. ~Charles Kingsley

The sooner I fall behind, the more time I have to catch up. ~Author Unknown

If it weren’t for the last minute, I wouldn’t get anything done. ~Author Unknown

Anyone can do any amount of work, provided it isn’t the work he is supposed to be doing at that moment. ~Robert Benchley

There are a million ways to lose a work day, but not even a single way to get one back. ~Tom DeMarco and Timothy Lister

It is an undoubted truth, that the less one has to do, the less time one finds to do it in. ~Earl of Chesterfield

The two rules of procrastination: 1) Do it today. 2) Tomorrow will be today tomorrow. ~Author Unknown

One of the greatest labor-saving inventions of today is tomorrow. ~Vincent T. Foss

You may delay, but time will not. ~Benjamin Franklin

Someday is not a day of the week. ~Author Unknown

To think too long about doing a thing often becomes its undoing. ~Eva Young

Don’t fool yourself that important things can be put off till tomorrow; they can be put off forever, or not at all. ~Mignon McLaughlin, The Neurotic’s Notebook, 1960

Work expands so as to fill the time available for its completion. ~C. Northcote Parkinson, 1958

Crises teach you to focus on fundamentals, dont let anything else sway you.

Am starting with Azim Premji…

Winning is about leveraging adversity to build a winning culture

Make life as meaningful as possible.

Try looking for good in every situation, no matter how bad it may first appear. It will make all the difference in the world.